7:45 am pick up today. We had to get up earlier than usual. We got down to breakfast with 15 mins to eat. There was a yellow curry that looked delicious, so I put some on my plate. There was no warning about how spicy it was! It was still tasty though. This morning they actually had breakfast potatoes. Well a Thai version ,but it was good. The bus driver showed up at 7:43.

It was nice to see someone show up before the scheduled time. We got on a small 11 passenger van, and there were three other people already in it. It was very posh with plush, tan leather seats. The ride was very comfortable. I’m very glad it was comfortable because the guide told us the ride would be 1 hour, 40 minutes, and 15 seconds to the elephant park. But we thought it was worth it to see the elephants ethically. I just realized that when we got on the van, we must have smelled heavily of curry. 😂
The road up the mountain snaked. Literally the whole way. It was really cool? Another word. When we finally got to the park, we were greeted with the sight of elephants. It was quite the reward for the long drive. We walked up to the registration area and had an hour long briefing about the park, elephants in general, and how to behave around them. We learned about how the park was started and its philosophy. We got a welcome drink. It was made out of a traditional Thai flower. It was dark blue but then turned purple after a lime is squeezed into it. It was sweet but tasty. 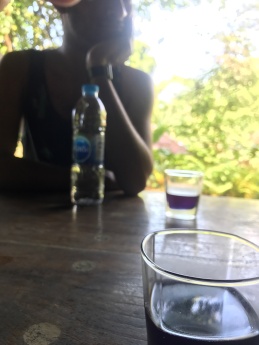 We walked over to where the elephants were. Then we climbed stairs to a raised platform, where the mahouts brought their elephants. Each rider had to decide where they were going to sit. Either in the front, like a mahout, or in its back. The back rider had a rope to hold on to, and the front rider had nothing. What do you think I chose? Denali sat like a mahout and I wanted the security of the rope. I’m happy with the choice I made. 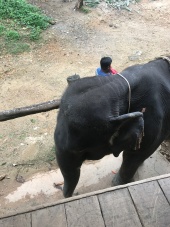 We rode the elephant up to the top of a hill over rocky terrain. Here’s where the rope came in handy. Even with the rope, I was sliding all over the place. At the top of the hill, we fed the elephants many bananas and they got a rest while we learned more about them. For instance, Asian elephants have been domesticated for over 3,000 years, in Thailand they are like pets, like a dog or a horse. They are endangered. 75% of the population is domesticated in captivity. Most of the other 25% live on preserves so they can be monitored. They roam free in large areas, but are not completely free. It’s illegal to poach an elephant from the wild, and if you get caught, you will go to jail for the rest of your life. But people still do it, because if you have an elephant, you are set for life with the amount of money you will make. If you are successful with the capturing of the elephant? The government won’t come after you. They will only do something if they catch you in the act. I think my most favorite fact was that elephants have 400,000 muscles in their bodies. 100,000 are in their trunk alone. 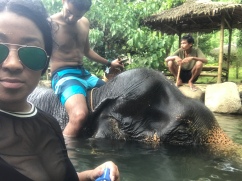 After we learned more about the park and the elephants, we rode them back down the hill. Then we changed our clothes and gave them a bath. When bath time was finished, it was time for lunch. As you can see it was very appetizing. 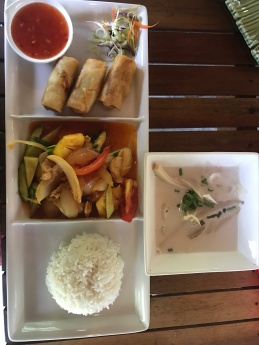 After lunch we headed home. We arrived late for our ride to the Thai cooking class, so we hustled upstairs to change clothes.
I don’t think I ever said the crazy way we got to our Ao Nang hotel room everyday. You start in the lobby on the ground floor. You take the first elevator to floor 3 where you get off and walk around a corner and up a few stairs to lobby number 2. Then you go around lobby number 2, up two small flights of open stairs to a second elevator with now happens to be a different ground floor. You take this second elevator to floor 3, make a left, walk to a walkway, cross it and turn right into our hallway. We were the last room on the floor. It was quite a trek at least twice a day. 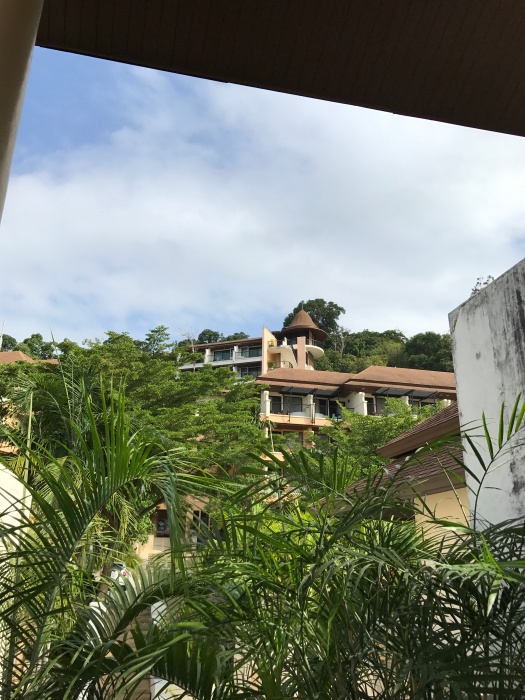 Back to the story…so we arrived late. No time to do anything but change a catch a tuk tuk to the cooking class. As I struggled to wriggle out of my pants that are a beast to get off when wet, my right thumbnail went flying. It was painful but I had to suck it up, get a few bandaids and head to the cooking class.

We finally arrived at the class, I realized it was outside. Cooking outside in the heat is not my cup of tea but I did it because Denali wanted to. We cooked 6 meals. It was actually a great experience, it was just hot. 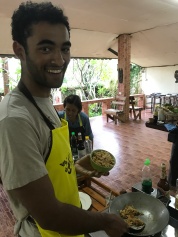 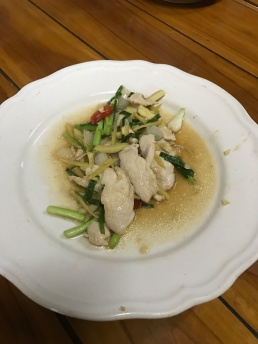 I was happy that it ended early, I was well fed, and able to get into bed.