It was nice to sleep in. I was still tired from yesterday. We got ourselves together and went downstairs. A tuk tuk driver tried to scam us into going to the less than stellar local floating market. He lied about the opening time of the wholesale market we were going to. It opened at 7 am and he said it opened at 11. He got indignant when I insisted it opened at 7. He the was like, yeah oh ok, THAT market is open. He knew we weren’t falling for it so he moved on. We walked up the street and grabbed a taxi. It dropped us off at the Pratunam Market. It was crazy! Just stalls and stalls, row by row. It was a maze of stores. Some rows dead ended. Some rows just look liked they did but if you turned you would get to another row. It just went on and on. 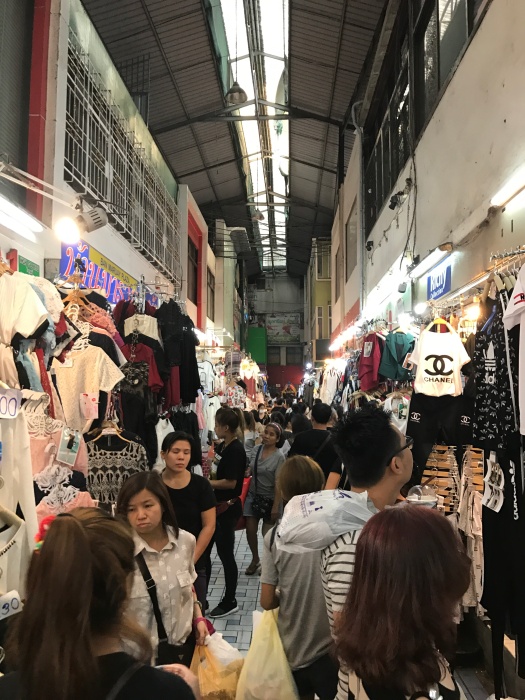 The main row was wide enough for a car to squeeze through, so you had to pay attention for cars. So rows were only wide enough for people and motorbikes. You could hear them slowly winding through the people. The people were the craziest. Most of them had huge bags of carts filled with clothing they were going to sell in other places. The more you bought from a shop, the cheaper each item was. There were lots of knockoffs. Mostly really cheaply made. But if you searched hard enough you could find better quality fakes. It was overwhelming after a little bit, so we walked towards the sunlight and made our way out.
We hadn’t had breakfast yet, so we looked for food. Denali saw an escalator to an inside market that said it had a food court. It too was a strange sight. Lots of clothes and stuff. I hate to use the word stuff, but that’s the best way to describe it. There was a little but of everything. Shoes, trinkets, pots, rope, you name it, you could find it.
The food court was in the third floor surrounded by shops and kiosks. In order to pay, you had to exchange your money for food coupons. I’ve never seen anything like that except at an arcade. Tokens in the place of quarters.

Denali gets the coupons and we pick where we want to eat. There is a decent choice. Arabic, Indian, Thai, Americanized, vegetarian, etc. With that choice came all of those smells, mixed together. I got my standard chicken fried rice from the Arabic place. I was lured in by the photos of samosas, they weren’t ready yet. Denali got green curry rice from an eatery on the other side of the food court.
We both enjoyed our food and marveled at the environment. I don’t want to call it strange, just different. We had some food coupons left over so we got some ice cream. I couldn’t decide between cookies and cream or rainbow so we got a scoop of each.

The cookies and cream tasted like a bunch of an Oreo filling with a few cookies crumbled in it. The ice cream wasn’t really creamy. The rainbow tastes better but we couldn’t quite place the flavor. But we finally figured it out. It was birthday cake! We were sharing back and forth until we got to the cone, I took the rainbow. Right as I was biting into the bottom I dropped it on the table. Denali and laughed and he went and got another cone. But by that time I was full so he ate it all.
We went back downstairs took a short look around. I found some elephant pants and we made our way outside. We hopped in a taxi, it was time for the Grand Palace. The taxi let us off a block away of the closer side. A woman tried to scam us into going somewhere else first because it was too crowed right now. We told her we were going anyway. She got mad as usual. We walked to security, passed through, to the main gate. Today we got in with no problems, Denali’s legs were covered. 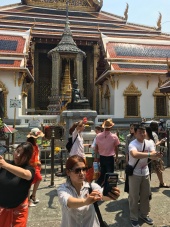 Like the woman said, it was very crowded. It felt like Disneyland but there were no rides. We walked around and saw the sights. It was amazing. I can’t think of a better word. Photos do it no justice. Almost everything was tiled. Some with tiny mirrors and gold, some with ceramic flowers. Everything was glittering in the sunlight. It was awe inspiring.

The Wat with the little emerald buddha was just incredible. They won’t let you take photos of the emerald Buddha or inside where it’s located. It sits high on top of an impressive shrine. All around on the walls are paintings like in the Sistine Chapel. Im not a good enough wordsmith to conjure up the words that will do it justice. If you ever get a chance, you should go.
After leaving the Grand Place. We walked to Wat Pho, to the see the giant reclining buddha. On the map it looked like a small jaunt but in reality it was far. By the time we got there I didn’t even want to go in. I gave myself a 5 minute sitting/ water break and then we made our way in. The reclining Buddha was enormous. I thought the one in the monkey cave was big. That one pales in comparison. There is an order of what you have to do while inside Wat Pho. You stop and take a picture of the head when you walk in. 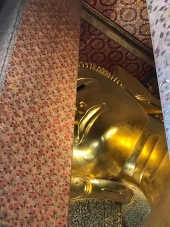 Then walk to the middle where there is a place to get closer to the Buddha to take a shot of you and the head behind you.( There was a line here. It was not very long but people kept trying to cut, and the line kept making an uproar about it. It was very funny) After taking your picture you keep walking until you get to the end. You walk out the door and then left. You are greeted with a view of the feet, inlaid with what looked like pearl or abalone. It’s breathtaking. You can’t get a good photo of the feet because there is a mesh wire over the window. You then walk back into the wat, but this time behind the giant Buddha.

There are rows of metal pots. If you want, you can buy a bowl of coins to put in the bowls. It makes a constant clanging sound. (We wondered what it was when we were in the other side.) After you admire the back of the Buddha, you make your way out of the front of the Wat and then you realize just how much there is to see at Wat Pho. Disclaimer: after seeing all of these wats in the last few days, I’d become kind of jaded. But seeing all there is to see at Wat Pho brought me back to life. It is my absolute favorite Wat to date. 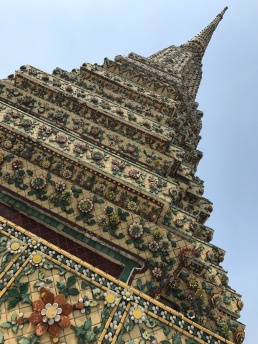 There were multi courtyards with rows of buddhas. Multiplicity of form is a beautiful thing. After gazing in wonder at one courtyard, you would walk through th a doorway into another courtyard with more buddhas, this time just bigger. If you looked to the left or the right, there were more courtyards with more buddhas. There were stone giants, there were spires of gold and spires covered with ceramic flowers. There is just no way to describe everything.

We thought we would only need a half hour or so at Wat Pho. We spent about two hours there. We could have spent more but it was time to get Denali’s suit.
We got a taxi to The Factory, given a bottle of water and guided to an upstairs room. Not as posh as downstairs. There was a curtain, a couch, a mirror, and some suits hanging up. We waited for the suit to be brought in. I had a brief thought that we had sold ourselves into slavery, but then they brought in the suit. Denali tried it on and it fit nicely.

He picked out a free tie and the gentleman packed everything up.
No one wanted to drive to Chinatown in rush hour but we finally convinced a taxi to take us to our hotel. We relaxed, got spring rolls, and called it a night