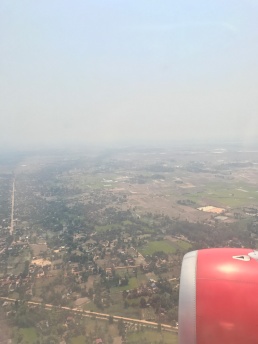 This morning we packed and checked out. I was sad to say goodbye to Bangkok. I will definitely be coming back. The bellboy asked if we wanted a taxi to the airport. We said yes, and he quoted us a decent price so we agreed. We got in the taxi and we could clearly see money changing hands between the bellboy and the driver. When we drove away, the driver said we must pay the tolls. We told him no, we did not agree to that. He got a little argumentative, and we said we would get out of the car. Then he sang a new song. He would pay highway. Then he put the meter on and covered it so we couldn’t see the numbers. It was very sketchy. I asked if he was using the meter. He said no. At this point it was just hilarious.Then I reiterated we were not paying tolls, and we had a set price.
He was driving on and off the highway to avoid the tolls. It was quite a ride. We got to the airport with no trouble after that. We went through the normal airport experience. This time, I apparently pre-paid for bags when I bought the ticket so that was nice. We got through customs and security with ease. I finally had Starbucks in Thailand. They are everywhere but I had never stopped. I checked out the gift shop and then went to the gate. There was some sort of commotion but I don’t speak Chinese, so I didn’t know what was going on. It was two gates down so it wasn’t really my concern. Just a lot of shouting.
Finally it was time to board. The boarding was late so they didn’t even go by rows. Just a final boarding call. The line was massive. So we took a cue from our Chinese experiences and walked to the front where they were taking the express customers. By then they were taking everyone. So we skipped the long line. We got on the bus to the plane, boarded the plane and took off. The flight was short. We pretty much filled out the customs paperwork, the arrival card, visa application, and then it was time to land. We had to wait in a short line for the visa application. The whole time an older man behind the counter was staring at us. I’m assuming he couldn’t figure out why we were in the line for foreign visas. We handed over the application, our passports, and $30. We waited for about 5 minutes and then got our passports back with a really cool Kingdom of Cambodia visa installed.
We got our bags and went to the taxi area. We had to choose what kind of ride we wanted. Mini bus, car, or motorbike. We chose door number two and went for the car. We got a ride to our hotel for $7. The car driver asked us what we were going to be doing while we were here. We told him and he offered his brother’s services. His brother drives a tuk tuk. So we bargained a price for the two and a half days we would be in Cambodia. We arrived at the hotel and left him a downpayment for our upcoming tuk tuk ride.
The hotel was clean and spacious. It was weird to use an actual key for the room but that was really my only complaint.

We arranged for the tuk tuk driver to pick us up at 2pm, so we had two hours to relax.
He arrived on time and off we went. First we went to the Angkor ticket pavilion. 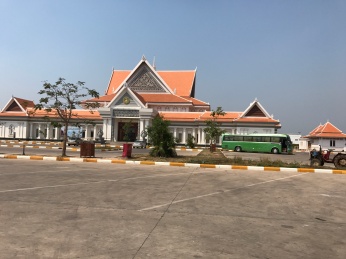 We bought our three day passes. They take a photo of you for your pass. After getting our tickets we drive toward Angkor Wat. We rode past a lake and saw a free roaming monkey. Then all of a sudden we saw Angkor Wat in the distance. It was a beautiful sight.
Our driver dropped us off in front of a bridge. We started walking across it. Angkor Wat kept getting bigger and bigger. We finally got to the gate. It was beautiful. You could tell the rocks were ancient, they told an old story. 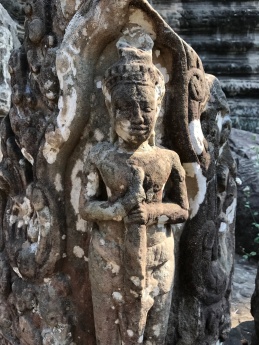 We kept walking though the various doorway and courtyards until we arrived at the Bakan tower. It was very high and the steps were very steep. It was frightening going up and I dreaded thinking about going down. The view was breathtaking from the top, so it was all worth it. There was a main courtyard surrounded by hallways. There were Buddhas in various alcoves. Then came the worst part, going back down the stairs.

I listened to my very wise, long lost, Aunt Rosa. When going down stairs that were very high or steep she would say, “go down backwards.” That’s exactly what I did.
After the death-defying descent, we were done sightseeing Angkor Wat. But before we walked over the bridge we saw a monkey digging in the trash. It found a smoothie and was ecstatic.

After seeing the monkey, we hurriedly walked over the bridge to a little shopping area. Same trinkets and wares, but the people were very pushy. We walked back to our tuk tuk through another shopping area. A woman tried to sell me a scarf. I told her no multiple times. She wouldn’t take no for an answer. When I started walking away she gave me a ridiculously cheap price. I told her no again, and this time she got mad and finally gave up.
We got back in the tuk tuk and went to the next area. It was a temple on top of a hill. I’d had enough, so Denali went up without me. He told me I made a good choice in staying behind, it was a Benner hike. There was another little shopping area below. I got some more harem pants. I may never wear real pants again.
There was also an elephant ride at the bottom of the hill. They were going up and around a small incline over and over. They had the elephant seats on them so people could ride them. It was pretty sad. At least the seats were the better kind for their back, but that was the only positive. But after learning about elephants at the other park, I knew this was not great for the elephant. 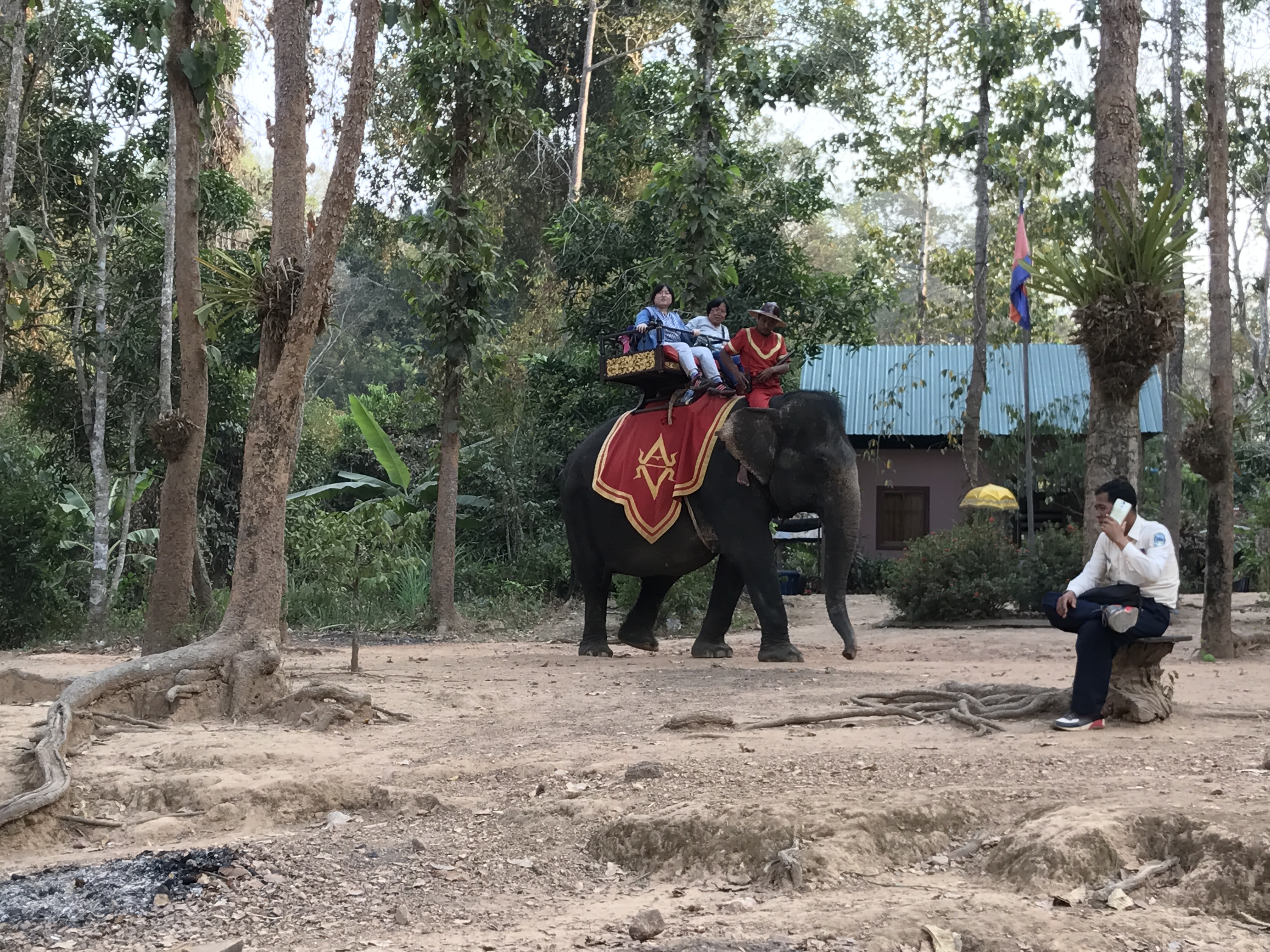 At last we hopped in our tuk tuk and rode to the hotel. We made it back just in time for the last few minutes of happy hour. Drinks, spring rolls, and red curry coconuts were what we needed after a long day. 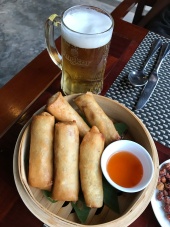