Our new hotel was clean and very modern, but had terrible wifi. We were both very tired after the problems from the previous night. Denali at this point was being extra annoying so I chose to let him go to breakfast alone. I sulked in my room and tried to navigate the terrible wifi. He came back, and I was still annoyed. I left and did some shopping for last minute gifts. Two hours walking around the touristy area of Phuket in the heat, and I was ready to go. I hailed a tuk tuk back to the hotel and soaked up the AC. Denali went to the pool and when he came back, we were friends again. 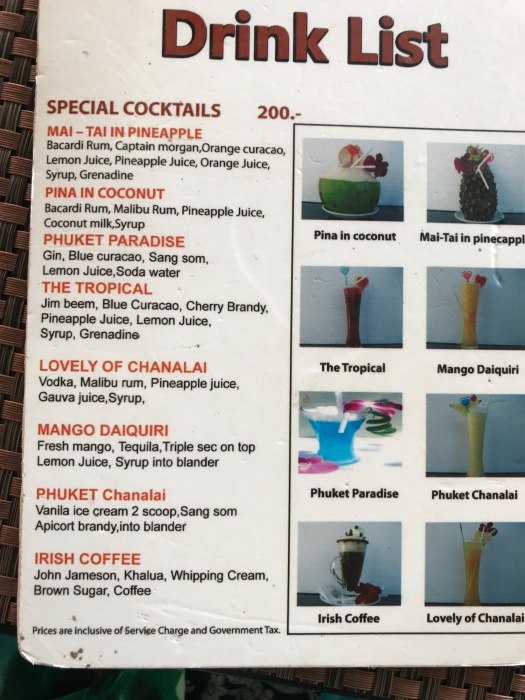 After unsuccessfully trying to order room service, I went downstairs to the hotel restaurant . Denali joined me, and we ordered food and drinks. I had been ordering Mai Tais wherever we had gone, and they had all tasted differently. Not just from what a Mai Tai should taste like, but from each other. On this particular occasion, my Mai Tai tasted like orange soda and Denali’s Gin Fizz tasted like Sprite, only Sprite. We tried to remedy the lack of alcohol by ordering Margaritas with an extra shot. His drink didn’t taste like there was any alcohol in it. So we asked the waitress and she said that he had ordered a smoothie, not a margarita. Denali and I just looked at each other, sighed, and calmly explained that she was incorrect.

Denali got his refurbished drink before anything came for me. So we were wondering what had happened to my drink. Just as we looked over to see what the bartender was doing, we saw him adding water to my margarita. It was over for me then. We watched three other people come over to help him figure out how to make the drink. They finally brought my drink over. It was in a tiny margarita glass and a huge tumbler with a shot. Side note: Denali’s glass was a full on “Tom Collins-like” cup. I smelled the shot, and it was clearly not tequila. In fact, it smelled like rubbing alcohol. We both tasted it, and it was literally the worst tasting vodka I’ve ever tasted. I complained, and it took three people to not understand. So I went to the the front desk to find someone that understood English a little better.

I explained the situation. She came over and talked to the other three people. They shrugged their shoulders said that’s how they made the drink. At this point, I asked to see the bottle of “tequila”and it was brought over. It had a giant “TEQ” on the label, but said it was made from potatoes. Clearly, it was vodka. The bartender tried to argue with me and insisted that it was tequila. I politely tried to let him know that it was vodka.  I asked to see the bar. Behind the bar were bottles from the same liquor company, all were labeled as different liquors, all were made from potatoes, ergo…vodka. I had then  discovered why all of my previous Mai Tais tasted a little off. They were all made with this terrible vodka and not tequila. The bar had another bottle of tequila with a little Mexican man wearing a sombrero, but it looked questionable, so I gave up. Our food was standard fair, but good. We ended up not paying for the drinks and went back to our room and chilled.